Revising Common Core Math Should Be Just the Beginning

Every month we feature an opinion piece written by teachers in the MƒA community. Welcome to MƒA Teacher Voices. 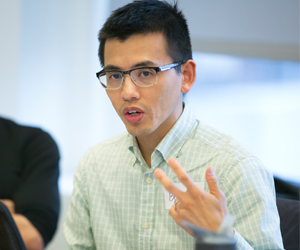 The Common Core Standards have been controversial in New York ever since they were adopted in 2010. Hastily rolled out and tied to more difficult assessments and a new teacher evaluation system, the standards became a lightning rod for widespread criticism. To help address these concerns, earlier this year the New York State Education Department (NYSED) convened committees to clarify the Common Core. NYSED recently released their recommendations, which are open for public comment until November 14. Having worked on the high school standards myself as a member of the state’s Mathematics Standards Review Committee, I believe that despite their modest scope, the recommendations create an opportunity for more substantial future changes in mathematics education.

The proposed revisions address many flaws in the original standards. The committee clarified vague standards like “Prove theorems about triangles” (G-CO.C.10) by specifying what concepts should be taught. Standards that required certain methods (and in many cases, tedious or difficult methods) of solving problems, such as dividing polynomials using long division (A-APR.D.6), were broadened to give teachers more flexibility. Other standards that were misplaced were moved to a more appropriate course or removed entirely. In many ways, the proposed revisions make the existing standards more concise, accessible, and precise.

By design, the proposed changes have several limitations because NYSED decided not to overhaul the standards. Thus, these suggested improvements were not designed to address larger issues about math education. For example, neither the revisions nor the original standards accommodate the struggles of groups like English language learners or students with disabilities. They also don’t directly address the heated debate surrounding Common Core state assessments. In addition, the revisions don’t deal with potentially beneficial but radically different large-scale questions about the curriculum. I have often wondered if probability and statistics, which currently is awkwardly woven into Algebra I and Algebra II, would be better off as a separate course that terminates in a Regents exam. Such a proposal raises questions about funding and training and might even require legislative action to change graduation requirements – a discussion that is far beyond the scope of the standards review committee.

These limitations don’t make the revisions meaningless or unnecessary. Even if you oppose the Common Core, you’d have to agree that whatever standards we use should have clear language, and the revisions help do that. The standards are part of a larger educational policy that should be evaluated in a public conversation.

But how can such a discussion happen? I found an answer as I participated in the Mathematics Standards Review Committee’s work. Throughout the committee’s work this year, NYSED facilitated a thoughtful and passionate conversation with educators about how we should teach math. Participating in these conversations made me realize that we need more opportunities for teachers like me to shape our educational system. Teachers not only see firsthand the effect of educational policy on students but also face the most direct consequences when that policy falls short. Unfortunately, many teachers are too busy teaching to follow these discussions and only find out about them after decisions have been made.

To address this, educators must get more involved in the broader conversation about educational policy. First, they should review and comment on the proposed changes to the standards on the state’s Aim High NY website before the November 14 deadline. My Math for America colleagues and I have put together an interest group for MƒA teachers to discuss the proposed changes so we can respond as a group. (On the state’s web site, educators can send comments individually or collectively.) When possible, educators should take advantage of NYSED’s opportunities to get involved in test development activities such as writing Regents exam questions, which have been written by New York State teachers for over 100 years.

Most importantly, we need regular public discussions that comprehensively examine standards, assessments, and instruction together. Educators should work with our teacher unions, legislators, and NYSED to create requests for proposals to address specific issues, such as how to improve the state’s graduation rate. To ensure that a broad spectrum of teachers participates, NYSED can work with local school districts and teacher unions to hold meetings directly with teachers during their mandated professional development. Groups of teachers could work within or across schools or through professional organizations like Math for America to propose practical, cost-effective, and scalable solutions based on their experience. These plans could then be vetted by district committees with public comment periods and eventually by a statewide committee, which could then present recommendations to NYSED and the Board of Regents.

In the end, we can not only improve the Common Core, but also make our educational system work better for all students. Revising the standards should be the beginning, not the end, of this process.

Bobson Wong has taught high school mathematics in New York City public schools for over 11 years. He is a two-time MƒA Master Teacher and a recipient of New York Educator Voice Fellowship. Bobson has written and spoken extensively on mathematics education. He has been featured on the PBS television program American Graduate: A Conversation with Teachers, and his articles have been published in the Mathematics Teacher, Washington Post, and Queens Tribune. In his eight years in the MƒA community, Bobson has led several workshops and professional learning teams. He tweets on education at @bobsonwong, manages a web site with resources related to New York State Common Core math (http://reachthesource.org), and recently started blogging at http://bobsonwong.com.