Through interviews with Brian Palacios, MƒA Master Teacher, and Megan Roberts, Baker examined how MƒA fosters an environment of trust, inspiring Palacios and other teachers to plan their own summer conference: 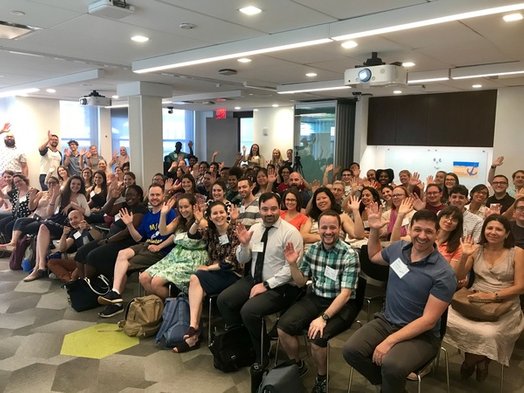 “Brian Palacios, now an MfA Master Teacher in his 5th fellowship year, was hesitant to apply [for an MƒA fellowship] at first. But after years of encouragement from his colleagues, Palacios is now adamant that the role MƒA has played in his professional life would be hard to overstate. After talking about the details of the program itself, the courses he had access to, the people he had met, Palacios wanted to step back and make sure he talked about what it meant to him. “It’s just so important and vital,” Palacios said. “It’s such an important part of our careers and our practice. It just … it means a lot.”

“That trust also played a huge role in the creation of the Summer Think conference, now in its second year. Palacios had used some of his fellowship funds to attend a conference and came back wishing that MƒA could host its own. […] MƒA teachers […] wanted the opportunity to spend a few days exploring a topic with their colleagues when they didn’t all have grading and classes waiting for them. Though MƒA provided financial and logistical support, the planning committee was ultimately made up of teachers.”

Palacios, a member of the Summer Think planning committee for two years, highlighted how the experience of being a leader within the conference has been so important for him, and how more teachers should have the chance to step up and shape the conference, too:

“I don’t think I felt like I was ever trusted in a significant way before that point, and I felt myself hitting a wall. […] I never would have thought about the opportunity to plan a conference, but I won’t want to hog the experience.’ Palacios said. ‘Someone else should get to do that; they should get their chance to make it even better.”

Read the full story on the MƒA Summer Think on the Scientific American blog, Budding Scientist.