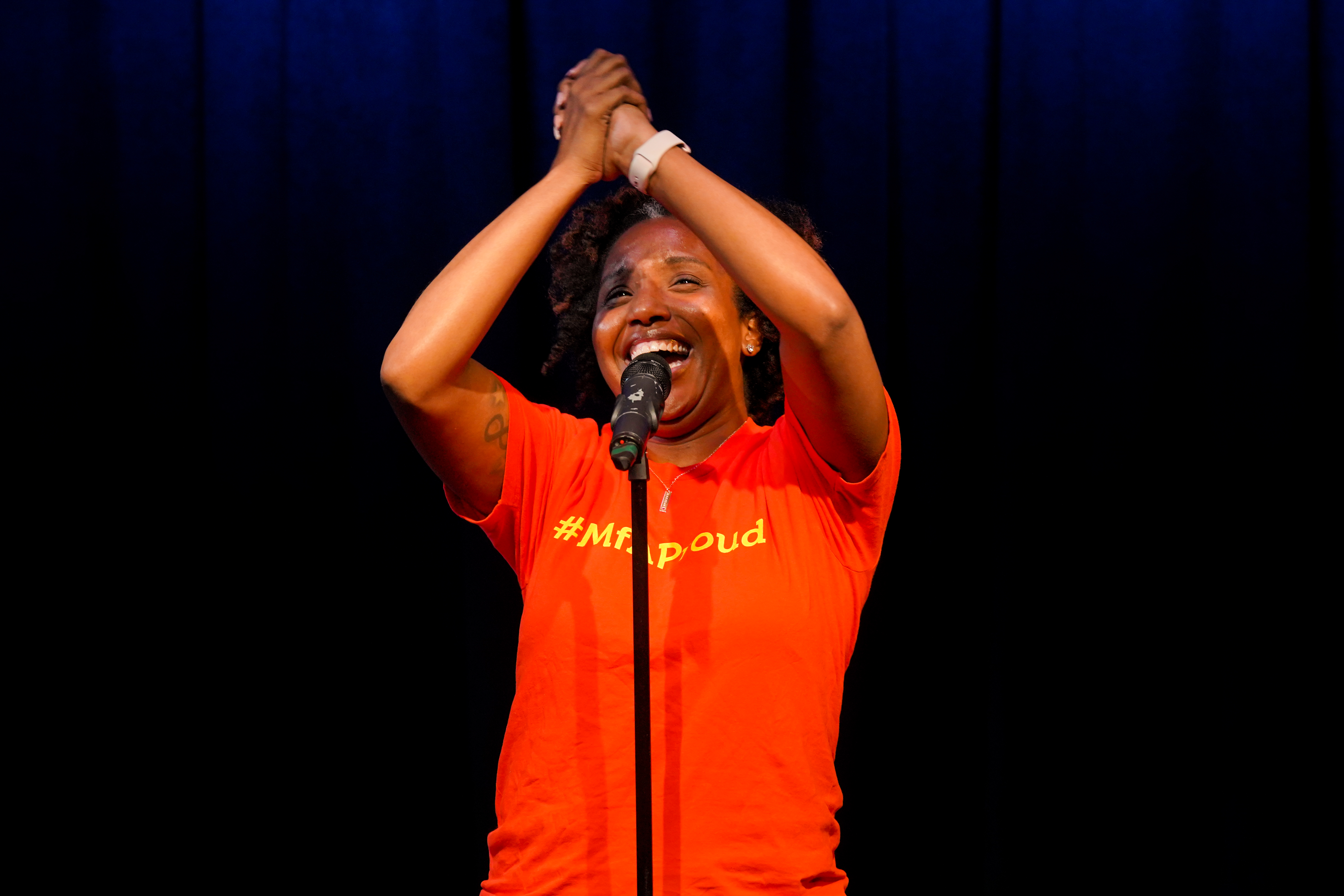 MƒA Master Teacher Shaniece Mosley was one of five MƒA teacher speakers at this month’s MƒA Thursday Thinks collaboration with The Story Collider. The event, held on May 2, 2019, featured an evening of storytelling as MƒA teachers took the stage to share their authentic experiences with math, science, and life inside and outside the classroom. Read Shaniece’s story on what she hopes her students see in her below.

On the 1st day of school, I walk into my classroom and I am so happy to see all the new faces. I excitedly scan the 34 AP chemistry students who sit in front of me and I see two black faces. Two. In their faces, I see me.

In 1998, I was a 4th grade student at P.S. 30 in the south-side of Jamaica, Queens. I grew up in Rochdale village and if you’ve ever flown out of JFK you have definitely seen it. It’s the collection of 20 or so tall brick buildings that jut out into the skyline. I attended P.S. 30 from the time I was in Pre-K and I knew just about everyone I went to school with. Pretty much everyone who went to our school lived in our community. It wasn’t a rare sight to see our teachers shopping at KeyFood or doing laundry in the basement of our building.

Entering the 4th grade changed the trajectory of my whole life. Up until this point in time, all my teachers looked like me. And I mean that in every sense. From pre-K until 3rd grade, I had only been taught by black women. I think now about how powerful of an experience that is and it makes sense why we were all fascinated when Ms. Rahman entered our school as my 4th grade teacher. Everything she did and said amazed us. Her clothes (matching pantsuits!), her handwriting (perfect cursive), everything about her was intriguing. So even though we all hit her with the “huh” face when she announced we would be participating in a science fair, we all obliged.

I came home and told my grandmother that I needed to do a science fair project. She responded, “What’s that?” and I replied, “You know, like a volcano.” To which she replied, “You ain’t making no volcano in my house!” So I set out to find my project. Honestly, I don’t even remember how I came up with the idea to grow salt crystals, (seriously, what did we do before Google?!) but my grandmother gave me ten dollars to get materials and I discovered that most of the stuff I needed we already had in the house. So salt crystals it was.

We had a few weeks to do our experiment and put our boards together and then we had an all morning fair. Teachers and school staff came around and asked questions about our experiments. Later that day they announced the winners. How awesome would this story be if I won 1st place? Well I didn’t. I won 2nd place. And I cried. Like boo-hoo cried. Like Kim Kardashian ugly-cried.

I think back now on how silly my project was. How simple and cheap it was. When I thought of what science is, I didn’t think that what I did even came close. I mean, scientists don’t come from the south-side of Jamaica Queens. They don’t look like me.

Fast forward to 2007. I had just transferred from Northeastern University to SUNY Albany and I enrolled in P-Chem and the P-Chem lab component was taught by the chair of the chemistry department. Our first lab session was spent going over the expectations for the lab work, creating our lab groups and coming to grips with the fact that no matter what we did, our first lab reports would be underwhelming to our professor. In his own words, “no one gets an A the first time around”.

Two weeks later, the professor called each of us into his office one-by-one to discuss what needed to be improved for the next report. My last name is M so of course I wasn’t first, but student after student was called before me and now, I’m starting to think “maybe he forgot me”, or “maybe my writing is just THAT bad”. Of course, I was the last name called and my heart was pounding so hard I could hear drumming in my ears. When I sat down across from him, he hands me my paper with an A- circled in red on top.

He starts by commenting on how well written my paper was and how impressed he is that I did so well. Inside I’m elated, my heart was still pounding, but now for a different reason. He actually thought my writing was good! He then proceeds to ask me a few questions.

“Did you attend private school?”

“No. I went to public school in NYC.”

“Wow! I just can’t believe it. You write so well. I am thoroughly impressed by your work.”

“You wouldn’t happen to be Haitian, would you?”

“The reason I ask is because my son is doing charity work down with the Hait-ians and it would be great if I could tell him I met one here.”

And this was the end of our exchange. I went back to my dorm room and called my mom to tell her about my first big paper. She, however, was not as excited as I was.

“He said that I wrote well, and he thought I went to private school. He even asked if I had a tutor.”

“He said this to your face?! Are you serious?!”

“Mom, you just don’t get it. I did really well on my paper. I mean I know it was kind of weird with the ‘are you Haitian’ question, but he said it himself, no one gets an A and I did.”

And that was one of the most difficult conversations my mom and I had ever had.

How could a compliment be an insult? He’d given me an A, right? Wouldn’t it have made more sense if he failed me?

It wasn’t until much later when I was confronted with my own colleagues’ soft bigotry that I looked back on this exchange between my professor and I and truly saw it for exactly what it was. His idea of what people who “looked like me” were capable of was not in line with what I showed him. His shock was rooted in an ideal that if I were to perform to a certain caliber, there had to be some explanation of how I was able to do it. What help did I have to get here?

His thinking magnified on a larger scale sets the stage that allows there to be only two black students in my AP chemistry class.

These two stories from my life, almost a decade apart, aren’t unique. People who look like me have and will continue to break down barriers and challenge long-held assumptions of what a “chemist” looks like. As I stand in front of my students year after year, I work to make sure that when my students of color see my face, they see themselves.

Shaniece Mosley is an MƒA Master Teacher and has been a public-school teacher for the last eight years. She currently teaches regents chemistry, AP Chemistry, and science research at Midwood High School in Brooklyn. She attended both Northeastern University and SUNY Albany where she received a B.S. in Chemistry. After becoming a NYC Teaching Fellow, she received a M.S. in Secondary Science Education from Pace University.