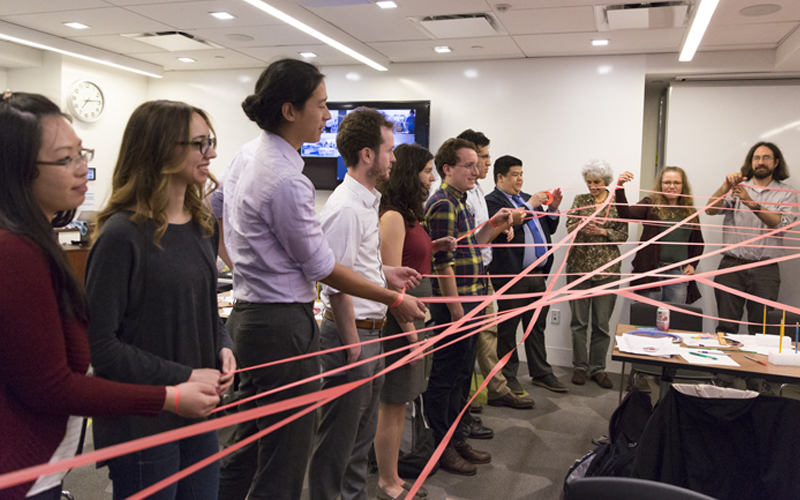 If you’ve never been to a George Hart event before, you might wonder how art, sculpture, and building relate to teaching mathematics. Whenever I’m asked to describe why I find his events both interesting and useful - more on his March 1st MƒA Thursday Think talk below - I’m reminded of Jackson Pollock, the 20th century American artist known for his large “drip” paintings. The first time I saw a Pollock drip painting I was utterly confused. Why would anyone think that this was beautiful and worthy of being called “art”? What distinguished this collection of paint from that of a deranged three-year-old? And who thought it would be a good idea to put this in the MoMA?

I later learned that Pollock’s method for creating these paintings was not to randomly splatter different colors onto the canvas, as it initially appeared to me, but to follow a refined and detailed process. In the same way that Bach developed short, simple melodic themes into grand fugues, Pollock used patterns created by simple movements which he repeated and developed in a systematic way across the canvas. By learning about the process of creating the painting, I began to see structure and beauty in Pollock’s work, and it opened my eyes to an entire movement in art that had previously been foreign to me.

Just like art or music, math might be thought of as a process for developing intricate and beautiful structures from basic objects. In the same way a composer uses notes and rhythm to create music, or an artist uses color and space to create art, the mathematician uses numbers and operations to create mathematics. In teaching math, however, it is all too easy to forget the important role that the process of creation plays in making sense of the end result. If our students view mathematics as a random splattering of rules, definitions, theorems, and results on the canvas of our whiteboards, it is our responsibility to show them the patterns that make them make sense, and to do so in a tangible way that invites them to be active participants in the process of creating math.

I have learned a lot about process and math from George Hart. This week George’s Thursday Think will focus on mechanical puzzles, where participants will be able to play with a collection of puzzles and build small puzzles to take home. I am excited to see how he will provide opportunities for learners of all ages to explore the beauty of doing mathematics. I have had the pleasure of attending three of his workshops in the past, and while each workshop used different materials, they shared a common theme. In each, the process of mathematical creation was emphasized by exploring simple properties of some material and using these properties to build and develop large, beautiful structures. In a 3D geometric construction workshop, we used Zometool to explore the results of adding parallel segments to a structure. What started as a rhombus in the plane turned into a large rhombic triacontahedron which was then used as a building block in even larger constructions. In a workshop on hyperbolic functions, we investigated a free-hanging string and found we could use its structure to build a seven-foot cardboard arch held together with only the force of gravity. In a workshop on string art, we applied basic operations of addition and multiplication to numbers on a circle to create several beautiful, and sometimes surprising, designs.

If you’ve never been to a George Hart event before, and even if you have, please join the MƒA teacher community this Thursday at the MƒA Thursday Think for his presentation of “Hands-On Puzzles.” You can also watch it live on MƒA’s Facebook page. More than simply learning about puzzles and their solutions, you are likely to gain a deeper understanding and appreciation of the beauty of doing mathematics.

Andrew Wille is a two-time MƒA Master Teacher who teaches math at Brooklyn Technical High School. Andrew has presented three times at the MƒA MT²: Master Teachers on Teaching event and actively leads courses at MƒA, with a focus on Calculus Professional Learning Teams.  He is active on Twitter as @afwille.